The Special Envoy of the ASEAN Chair on Myanmar H.E. Prak Sokhonn has announced to welcome the State Administration Council (SAC)'s declaration of Myanmar's Year for Peace in 2022.

H.E. Prak Sokhonn, also Deputy Prime Minister, Minister of Foreign Affairs and International Cooperation of Cambodia, made the announcement during a briefing on the outcomes of his second working visit to Myanmar from June 30 to July 02, 2022 for foreign diplomatic corps accredited to Cambodia and media members, at the ministry’s office in Phnom Penh this afternoon.

At the same time, H.E. Prak Sokhonn also expressed welcome to the commitment of SAC to further promote peace talks and engagement with the ethnic armed organisations in the Nationwide Ceasefire Agreement (NCA).

H.E. Prak Sokhonn informed Cambodia's good will to dispatch voluntary medical doctors to provide COVID-19 vaccines to people in Myanmar, but this will apply under ASEAN's mechanism.

In his conclusion, H.E. Prak Sokhonn affirmed that his second working visit to Myanmar was concluded with some progress.

“We could meet with different parties in the conflict in Myanmar, and discussed more agendas than the previous visit, especially we could open a gate for political negotiations on the crisis,” he underlined.

During his stay in Myanmar, H.E. Prak Sokhonn and his colleagues from ASEAN Secretariat have held many discussions, mainly on the Five-Point Consensus (5PC) adopted by the ASEAN leaders.

According to a statement released recently by the Ministry of Foreign Affairs and International Cooperation, H.E. Prak Sokhonn also paid a courtesy call on Senior General Min Aung Hlaing, Chairman of SAC.

The meeting with key leaders of Myanmar had covered various important topics; including the importance for further commitment by the SAC to move forward the progress in the implementation of 5PC, developments of political situation in Myanmar, the follow-up on the outcomes of the Consultative Meeting on Humanitarian Assistance to Myanmar on May 6, 2022 in Phnom Penh, and approaches on how the UN Specialised Agencies and international Non-Governmental Organisations can engage in Myanmar-led humanitarian work, including the Joint Need Assessment in the hard-to-reach areas.

On the same trip, H.E. Prak Sokhonn also held a meeting with H.E. Yar Pyae, Chairman of National Solidarity and Peace-making Committee (NSPNC) during which they focused on some agendas, especially on the progress of engagement with the Ethnic Armed Organisations (EAOs) in the NCA, the sharing of Cambodia's experiences in implementing the Win-Win policy of Prime Minister Hun Sen, and the role of National Solidarity and Peace-making Committee in delivery of humanitarian assistance and vaccination campaign to the people of Myanmar in the hard-to-reach areas.

After this meeting, H.E. Prak Sokhonn had another talk with the representatives of seven ethnic armed organisations, which have signed the NCA with the SAC. They exchanged views on political situation in Myanmar, especially how to advance peace talks for the benefit of all people in the country. He also extensively deliberated on several key issues, such as the developments of political and humanitarian situation on the ground in each state and region where these parties cover, the progress of on-going work and the contribution of political parties in the process of NCA, means to ease the situation in Myanmar and to advance peace process with representatives of seven political parties in Myanmar.

Besides, H.E. Prak Sokhonn met with the foreign diplomats from France, the U.S., EU and Australia to exchange views on the progress of 5PC, including provision of humanitarian assistance to the people of Myanmar. 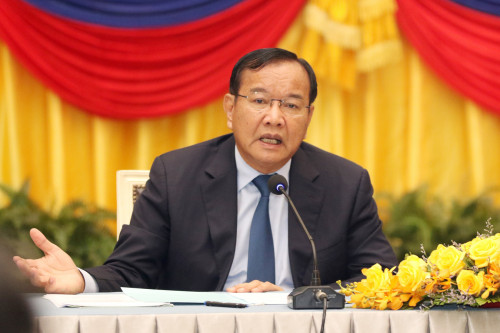 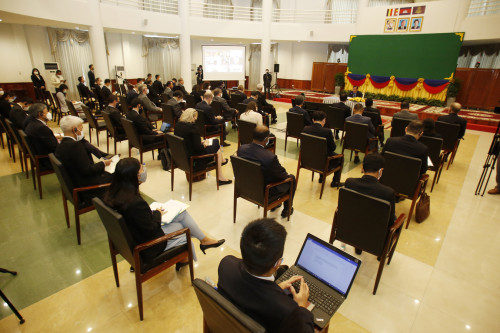